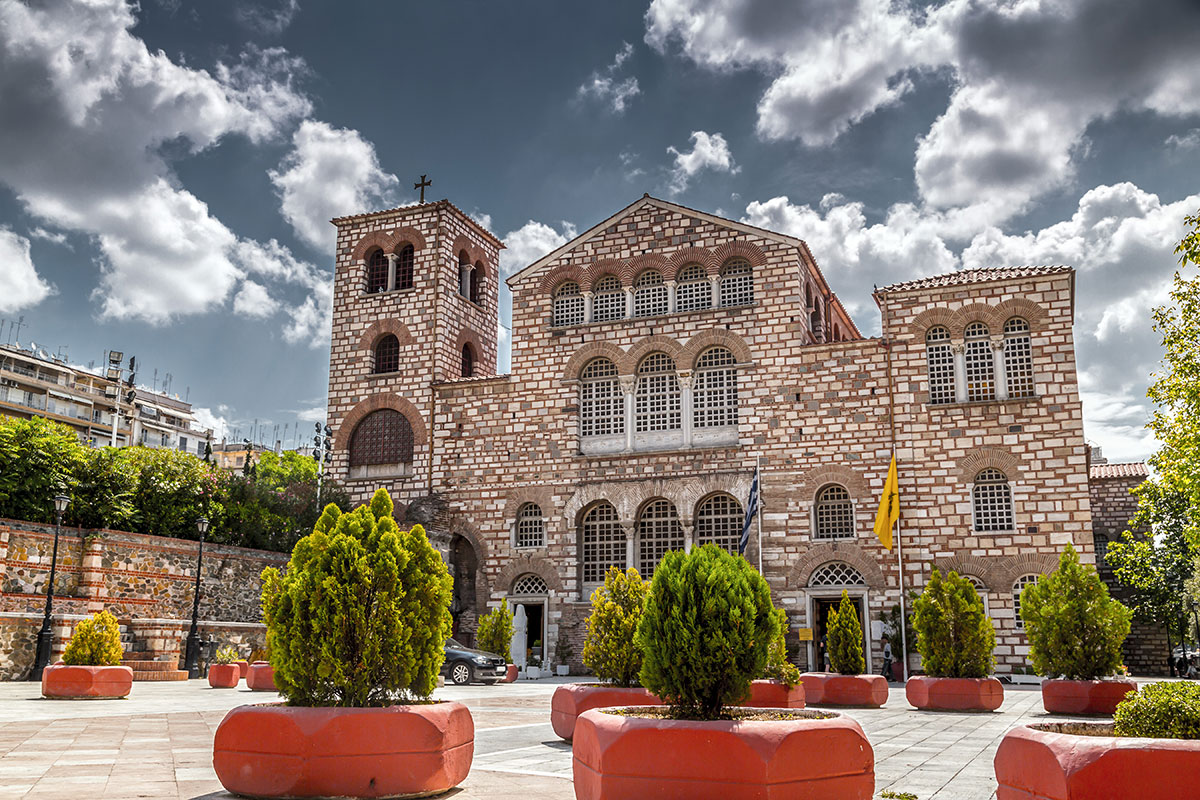 Situated on the Aghiou Dimitriou Street, north of the ancient Agora and the Byzantine Megalophoros, built on the ruins of a Roman bath complex, this was where Demetrius, an officer in the Roman Army, was imprisoned and martyred in 303. A small private chapel was first built there. In the mid-5th century, Leontius, prefect of Illyricum, erect a large basilica at the same location, which burned down during the earthquake of 620. With the contribution of Prefect Leontius and the Bishop of Thessaloniki, the basilica was restored to its original form of a five-aisled wooden-roofed basilica with a transept and gallery. The present-day restored form of the church – which was destroyed almost completely in the fire of 1917 – is the result of extensive restoration works that began in 1918 and ended in 1948.

The tomb of the saint is located in the NW corner, where it was believed to have stood in the Early-Christian era. The church, dedicated to the patron saint of Thessaloniki, is a pilgrim church and is primarily renowned for its mosaics that survived the great fire of 1917. Eleven votive mosaics of the 5th, 7th and 9th century are preserved at the two pillars of the sanctuary and at the western wall of the central aisle.

Beneath the transept of the Church is the Crypt, which, in the Late Byzantine Era, was the centre of the Saint’s miraculous myrrh production. Under Ottoman rule, this underground area was filled in and abandoned, while memory of its existence seems to have dissipated in the subsequent years. It was discovered due to the destructive fire of 1917. Since 1985, it has housed an exhibition, consisting of seven halls (A-G) and primarily consists of paleo-Christian and Byzantine sculptures that testify to each period of the long history of the Basilica of Aghios Dimitrios. Two display cases present coins and ceramics that originated from the fill that covered the interior of the Crypt.

South of the sanctuary of the Basilica, a chapel in the three-aisled basilica style, dedicated to Aghios Efthymios, was annexed in the 9th – 10th century. The interior of the church was decorated with murals in 1303 at the expense of Protostrator Michael Glavas Tarchaniotis and his wife, Maria. The mural, the work of a talented artist, is an example of the high aesthetics and dynamism of the Palaeologan Renaissance.